Mission Statement: Established in 1999, the Greensboro Jewish Federation has created a bond between Beltsy, Moldova in the Former Soviet Union to assist in rebuilding a Jewish community through moral, financial, educational and professional support.

A Mother's Smile was initiated by Greensboro Jewish Federation, designed to enhance medical conditions of the Beltsy Maternity Ward by establishing a heating and hot water system. 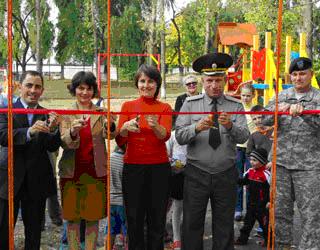 On October 9, 2009 a new playground was dedicated for children of military families at the Moldovan Ministry of Defense (MOD). The playground, which has swings, a sandbox, soccer goals, and park benches, is the result of joint fund-raising efforts by officers of the United States Armed Forces along with the Moldova World Children's Fund (MWCF). "The Ministry of Defense playground will provide a safer environment for the 160 children of military families who live in the building next to the play area," said LTC Craig Mix, Chief of the Bilateral Affairs Office at the U.S. Embassy in Moldova. "The local residents of the facility have also taken part in the fundraising and have collected almost 20 percent of the total needed for the playground, which shows their desire for the new, safer equipment." The remainder of the funds needed for the project was donated by MWCF, Sun Communications, Little Samaritan Mission , MOD dorm residents, and U.S. Army officers, including current and past Office of Defense Cooperation and Bilateral Affairs Officers BAOs at the U.S. Embassy.