This humanitarian mission provided dental care to over 100 disadvantaged children on this visit and over 3,100 children since 2010. This mission improved medical capabilities and services for the underserved population of Moldova. US Ambassador participated in the Rotary Chisinau Club meeting to celebrate the past 14 years of North Carolina State - Moldova Partnership and Rotary Clubs support for health care exchanges between Moldova and North Carolina.

The American team is visiting Moldova July 22-July 26. They will be conducting trainings for medical practitioners from the Ministry of Defense, the Nursing College, the Moldovan Nursing Association, and the Ministry of Health on CPR and other basic life-saving techniques.

This visit is part of a long-term project supported by the North Carolina-Moldova State Partnership Program to improve Moldova's nursing capacity. The project was launched in March 2013, with the initial visit of five American healthcare professionals to introduce successful procedures and techniques used by the U.S. Military Nursing Corps.

The North Carolina-Moldova State Partnership Program was established in 1995 and is overseen by the U.S. Embassy's Office of Defense Cooperation.

Two National Guard and three civilian nurses from North Carolina are sharing expertise this week with their Moldovan counterparts at the Ministries of Defense and Health.

The American nurses are donating their time to work with the Ministry of Defense, the Military Hospital, the College of Medicine, the Nursing Association, and Straseni Medical personnel.

The event is part of the North Carolina-Moldova State Partnership Program established in 1995 and overseen by the U.S. Embassy's Office of Defense Cooperation. The project aims to improve Moldova's healthcare system.

"By improving the capabilities of nurses, the program aims to enable doctors to treat and care for a greater number of patients and develop prevention programs," said U.S. Ambassador William H. Moser, speaking to one of the training sessions on Wednesday. "This is the program's goal, and I am sure that together we will improve the medical care in your communities," the Ambassador said.

The U.S. Army's European Command Civic Engagement Humanitarian Assistance Program provided all necessary supplies for the project. Presentations will be given at the Ministry of Defense Outpatient Clinic, the Military Hospital, the Moldova College of Medicine, and the Codreanca Medical Clinic.

These two teams of dentists are providing dental treatments to children from the Straseni orphanage, the Special School for Deaf Children in Chisinau, the Ialoveni boarding school, and the Jewish centers in Balti and Chisinau. In total, over 300 children will receive vital dental treatments.

This current dental mission was coordinated by the Bilateral Affairs Office of the U.S. Embassy in Moldova. U.S. and Moldovan Dentists Treat Moldovan Children

A team of U.S. dentists and dental students, headed by Dr. Stephen Mackler and Dr. Burton Horwitz, worked with several Moldovan dentists to treat children from boarding schools in Ialoveni and Straseni as well as children from the Balti and Chisinau Jewish centers. Overall, the dentists were able to treat almost 300 children in just a few days. This most recent trip to Moldova by U.S. dentists is part of the North Carolina-Moldova State Partnership Program, which was established in 1995.

The partnership between Wake Forea University Plastic Surgery and State Medical and Pharmaceutical University “N. Testimiteanu“ Chisinau Moldova began in 2003 as one of many NC-Moldova medical humanitarian initiatives . Faculty members and surgical residents from each academic center have participated in exchange rotations to the partner programs for the past eight years. An understanding and appreciation for the protocols for patient care have been gained by the participants. The lives of multiple patients have been enriched by the collaboration between the academic facilities as ideas for improving patient care and surgical techniques are shared, The current projects involve reconstructive surgery for women who have undergone masteotomius and children with craniofacial malformations. We will continue to participate in this endeavor and seek to strengthen the exchange with funding that will support continued educational efforts for faculty and residents for the benefit of the patient.

The March 2010 mission (3/27/10 - 4/3/10) will focus on breast reconstruction for women who have undergone mastectomy for treatment of breast cancer as well as for women who suffer from congenital breast deformities. The oncology surgeons have arranged for patients who meet these qualifications to be evaluated for such a reconstructive procedure. The Moldova surgeons, Drs. Hotineanu and Ureche, will further their superb skills for these techniques under the direction of Drs. Argenta and Kingman.

Drs. Silvia and George Railean have arranged a fill consultation schedule at the pediatric department with Drs. David and Sanger for children with craniofacial malformations such as ear deformities, craniosynostosis, and plagiocepahly. Dr. Ciobanu will be assisting with the pediatric consultations as well as filling the role of team leader.

Moldova-NC department leaders plan to meet for further discussion on forrualizing the partnership between the surgical departments. The goal is to share scientific ideas and surgical techniques to provide patients in both countries with excellent first class care on all levels while improving the skill and knowledge that collaboration of two excellent universities. 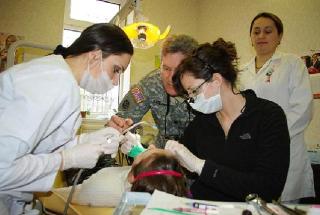 Two military dental specialists from the North Carolina National Guard, along with dentists and dental residents from the University of North Carolina Dental School, came to Moldova the first week of March to partner with Moldovan dentists and dental residents from the “N. Testimitanu” Moldova State Medical and Pharmaceutical University. The visit provided free dental care to Moldovan children residing in the Straseni and Ialoveni boarding schools. This event is a continuation of a series of yearly events launched by the Bilateral Affairs Office of the U.S. Embassy within the framework of the North Carolina–Moldova State Partnership Program. 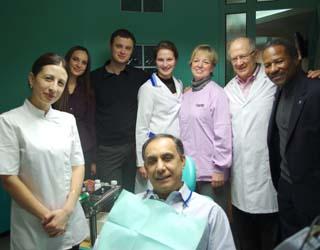 A team of seven American dentists and other medical professionals from North Carolina visited Moldova in November to meet with their Moldovan counterparts and conduct seminars and trainings. The visit is part of the North Carolina-Moldova State Partnership Program, which facilitates exchanges between the people of North Carolina and Moldova in support of humanitarian efforts and mutual understanding. The Bilateral Affairs Office of the American Embassy in Chisinau planned and coordinated the visit, as part of a program of ongoing support for health care events bringing North Carolina and Moldovan medical professionals and students together to share ideas and improve the quality of Moldovan healthcare.

Doctors Stephen Mackler and Rick Mumford led the American delegation, which included dental hygienists who provided training at the Moldovan Dental School clinic, hospice nurses who spoke to nurses at the oncology hospital, and team visits to orphanages to evaluate equipment needs and health programs. “It was an excellent, high-quality visit,” said Dr. Stella Samson, who also expressed her gratitude at the good ideas the team shared with the dental students. "Our visits are about fostering person-to-person connections," said Dr. Mackler, who has been leading delegations of North Carolina volunteers to Moldova for the past nine years. 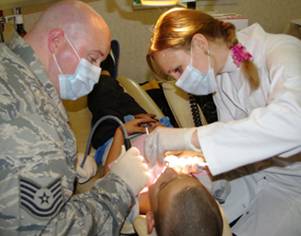 From September 14-18, a team of American and Moldovan dentists provided free dental care to children at the boarding school in Straseni. This event was a continuation of a series of yearly dental care programs launched by the Bilateral Affairs Office (BAO) of the U.S. Embassy as part of the North Carolina - Moldova "State Partnership Program" which began in 1999.

Since 2005, the Bilateral Affairs Office has planned and implemented six dental care events, with close coordination and support from the U.S. European Command's Humanitarian Assistance Program, the North Carolina National Guard, military dentists from the Moldovan National Army, dental residents and dentists from the University of North Carolina at Chapel Hill Dental School, and the Dentistry Department of the Moldova State Medical University. We always try to combine the Moldovan dentists with their peers from the United States, as it is a good learning experience for all, BAO Chief LTC Craig Mix stated.

These events allow the American and Moldovan specialists to learn from each other, share expertise, build relationships, and contribute to the betterment of the Moldovan state of health. Through the U.S. European Command's Humanitarian Assistance Program, the Department of Defense invests in the future of Moldova. We hope to foster relationships as international partners that will give us the ability to combine the efforts of various ministries, agencies, and military entities towards achieving greater results, said Mr. Desmond Brooks, Humanitarian Assistance Program Manager from the U.S. European Command.

Over the course of a week, March 28-April 4, US and Moldovan doctors provided free dental care to Moldovan children residing in the Ialoveni and Straseni boarding schools. Five students from the University of North Carolina at Chapel Hill School of Dentistry, together with two practicing dentists – Dr. Burton Horwitz and Dr. Paul Barrett and four military dental specialists from the North Carolina National Guard traveled to Moldova to volunteer on this dental mission.

They performed treatments at the two orphanages, at the DiaDent Private Clinic in Chisinau, at the Central Military Hospital and at the Republican Dental Clinic. This team effort was aided by Moldovan dental residents from the Dentistry Department of the “N. Testemitanu” Moldova State Medical and Pharmaceutical University and Dr. Diana Uncuta, private dentist and associate professor at the Dentistry Department of the Moldova State Medical University with the support of the university management, especially Dr. Pavel Godoroja, the Dean of the Dentistry Department. Dr. Uncuta, who started working with Dr. Horwitz six years ago, continues to support this project and opened the doors of her private clinic for this mission. Overall, the dentists were able to screen and treat almost 300 children.

This project was conducted within the North Carolina – Moldova State Partnership Program and was facilitated by the Bilateral Affairs Office of the U.S. Embassy in Moldova.
How can we make this page better for you?