The Co-chairs of the North Carolina Committee are the Hon. Philip A. Baddour, Jr., NC House of Representatives, and the Hon. Elaine F. Marshall, NC Secretary of State. The Chair of the Moldova Committee is Mr. Eugen Carpov, Deputy Minister of Foreign Affairs, Republic of Moldova. John McKenzie, president of McKenzie Associates, is a member of the North Carolina-Moldova Partnership Committee.

Those interested in participating in the Trade Mission or seeking further information should contact John McKenzie at (336)650-1957 or e-mail mckenzjl@aol.com .

The National Agency for Rural Development, ACSA, conducted an irrigation demonstration project for 100 selected growers in 2008. The project was an USAID aribusiness development project.

In November, 2009, Bob Wells, developed a series of information gathering surveys and provided leadership for the collection and analysis of the data collected as well as authoring the final report. The project successfully met two major needs of the Republic of Moldova-reducing endemic poverty and decreasing reliance on foreign imports of fresh fruits and vegetables, thus leaving more disposable income in Moldova. Available business records kept by participating farmers indicated that average income per hectare, 2.25 acres, increased by four times as a result of putting knowledge gained from the project to work in their fields and greenhouses. Before and after net incomes more than exceeded the targeted $500 per participant.

More than 6000 growers attended field days at the demonstration farms. Growers asked ACSA to provide help in marketing their produce. This project was continued in 2009.

Agriculture: The U.S. Department of Agriculture’s Foreign service [FAS], supports the Cochran Fellows. This program, named after U.S. Senator, Thad Cochran, provides scholarships to selected individuals to visit the U.S. During a 2 week stay in the U.S., the visitors learn about U.S. policy, management strategies, and technology related to their professional interests.

In May, 2009, a group of 11 agriculturists from the Republics of Moldova and Georgia with interests in agricultural irrigation were hosted by two retired faculty members from N.C. State University’s College of Agriculture [CALs].

Bob Wells and Ron Sneed developed a comprehensive schedule of lectures and field visits to demonstrate how micro irrigation systems are used in the production of fruits and vegetables. Water conservation is a critical need in the Republics as well as in North Carolina. The program received input from irrigation equipment providers, growers, Extension personnel and CALS faculty. Emphasis was also placed on post harvest handling techniques and marketing.

Subsequent contacts with some of the visitors indicate they have adapted their irrigation systems due to observations made while in North Carolina.

Bessarabian-American Trading, Ltd., of Zebulon is importing light aircraft into the United States for sale to sport aviation enthusiasts, using Moldova as a regional base of operations. Mr. Frank Swett is involved in importing aircraft from Moldova and Ukraine. They have bought three, one Antonov AN-2 in Moldova, two YAK 52s in Ukraine. One is currently enroute by ship from Sevastopol, one is ready to fly at Balti, and the third will be shipped in July.

Mr. Swett's company, Bessarabian-American Trading Ltd., is developing a program to bring excess Moldovan doctors to North Carolina and license them as Physicians Assistants, Nurse Practitioners, and Registered Nurses to help solve the serious nursing shortage in the United States. They will also look at bringing Moldovan nurses in as Licensed Practical Nurses and possibly Registered Nurses - with an English language training program in Chisinau, and an additional technical training program in the United States. Current estimates are for a shortage of 400,000 registered nurses in the U. S. within five years. There are currently 50,000 doctors in Moldova and a need for only 25,000 - and the Medical University in Chisinau maintains approximately 3,500 students enrolled.

Mr. Frank Swett and the Belgium-Luxembourg-Moldova Chamber of Commerce is working to develop a market for NC pork products with Moldovan meat packers. Moldova's Carmez, S. A., exports to the region, but can't obtain sufficient carcasses of high quality inside Moldova for it's markets.

Regimental Flag & Banner, Louisburg, NC, is importing carpet, woolen goods, and afghans from Ceadir-Lunga, Gagauzia, in Moldova for sale in specialty markets in the United States.

Bessarabian-American is staffed with an office in Chisinau to provide business services, contacts, research, interpreters, local transportation, reservations, arrival assistance, and fund transfer capabilities for anyone interested in doing business in Moldova.

Cavanaugh and Associates, of Winston-Salem is working to market municipal water leak detection systems in Moldova. The company has made two trips into Moldova and demonstrated the equipment in Chisinau and several smaller municipalities.

Steve Cavanaugh, of Cavanaugh and Associates is working with hog producers in North Carolina to develop production and marketing capabilities in Moldova.

They currently have bids pending for conversion of paper building blueprints and plans in North Carolina to the Computer Aided Drafting (CAD) system using engineers in Moldova. This work is not cost effective to do in North Carolina due to the labor intensity of the work. Moldovan engineers and architects do excellent quality work at very competitive rates and are quite proficient at CAD.

Molee imports, of Greensboro, is importing art and textile products from Moldova for exhibition and sale. MOLEE Imports is a small company owned and operated by two sisters, Julie Glandt and Melanie Golter of Madison, NC . This company has participated in the High Point International Furniture Market in Oct. 2000 and again in April 2001. MOLEE imports 100% wool rugs in exclusive designs in both plush and flat weaves, one-of-a-kind handmade village rugs and original art work . They are now expanding their line to small furniture pieces and other home accessories. They can be reached by e-mail: moleeimports@yahoo.com or you may visit them. 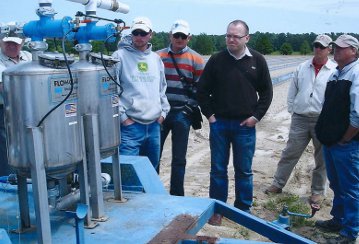