Begun in the year 2000, The Greensboro Jewish Federation has build a Jewish community Center, published a book, helped fund the restoration and preservation of the Beltsy Jewish cemetery, and numerous other humanitarian projects with this community in Beltsy, Moldova.

The City of Greensboro, North Carolina became an official Sister City with the District of Buiucani in the city of Chisinau, Moldova in June 2000 through the encouragement and support from the NC National Guard and their Partnerships for Peace program. Through this agreement, the two cities agreed to cooperate in cultural, economic, governmental, and humanitarian activities in order to foster understanding and cooperation between the groups in 5 Greensboro such as the Greensboro Jewish Federation, Piedmont Council for International | Visitors (PTCIV), and Rotary Clubs International that have been involved with Moldova. There have been numerous projects and contacts, both official ancillary, over the last four years.

The Cities of Winston-Salem and Ungheni, Moldova, agreed to be Sister Cities in the Summer of 2000. Their partnership encompasses economic, cultural, and educational goals that will benefit both cities.

The purpose of the Media Project is to help Moldovan citizens learn more about the America. We hope to provide content for radio shows, including live shows, daily and live music broadcasting and other entertainment.

The president of Teleradio, Moldova has already agreed to take part in the broadcasting project, allowing a program to be broadcasted without commercials and without selling copies of the program.

In addition, The King Pup Radio Productions of Tryon, NC turned has indicated a willingness to donate their complete catalog of King Pop Shows, which would involve 28 audio CDs of past fold music shows.

We are also seeking to have them record a number of concerts that could be broadcast later.

Moldovan artist Pyotr Musinschi toured North Carolina and Virginia for two weeks in October 2000 as guest of Mr. Frank Swett. He exhibited works in Raleigh, Louisburg, NC and Winchester, VA and received several commissions while here. If you have any questions regarding this project, please contact Mr. Frank M. Swett. 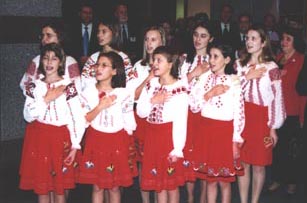